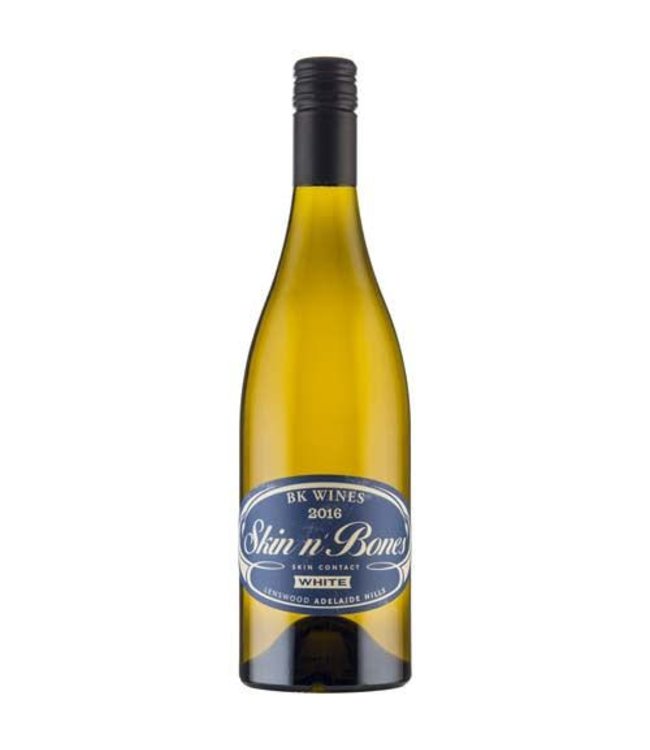 BK is Brendon Keys, a nomadic Kiwi who has that irksome quality of being multitalented: DJ, skateboarder, chef and a freakishly talented winemaker. After his vinous ‘rite of passage’ making booze in the US, Argentina and New Zealand, BK put down roots in the Adelaide Hills. There aren’t any high- octane bruisers here, but wines of texture and detail that have an almost old world sensibility. He describes his winemaking as ‘modern French’, and why not. He focuses on varieties and vines best suited to their sites, and makes wine in an intuitive, gentle way – knowing when to intervene and, perhaps more importantly, having the courage to do nothing.

With an ethereal, oily, freshly herbal scent of crushed young stinging nettle and oregano in late spring, this vintage’s version of Skin-n-Bones White is the picture of chubby, cherubic vitality. Texture is at the heart of the Skin-n-Bones game and this time around the sensation is best described as glinting like a golden beach bathed in late-afternoon sun, the nose on this wine is surprisingly musky, rustic and – dare we say – ‘red’.

The grapes were hand picked from a site in the cool pocket of Lenswood and fully destemmed but not crushed. The fruit and juice melded on skins in tank for one month with twice a day gentle pumpovers from a perastaltic pump thus not true maceration. After 30-odd days, the juice is pressed off and gently racked into neutral French puncheons where it rests gently for 12 months. Malolactic Fermentation occurs naturally in barrel.

The aromas evoke a firm cheese spiked with peppercorns or a young sopressa. The palate is quinine-tangy, lemon pith and almost saline with an enticing tannic backbone of young rosemary. Juicy pear fruits to taste. An uncommonly complete and complex white.